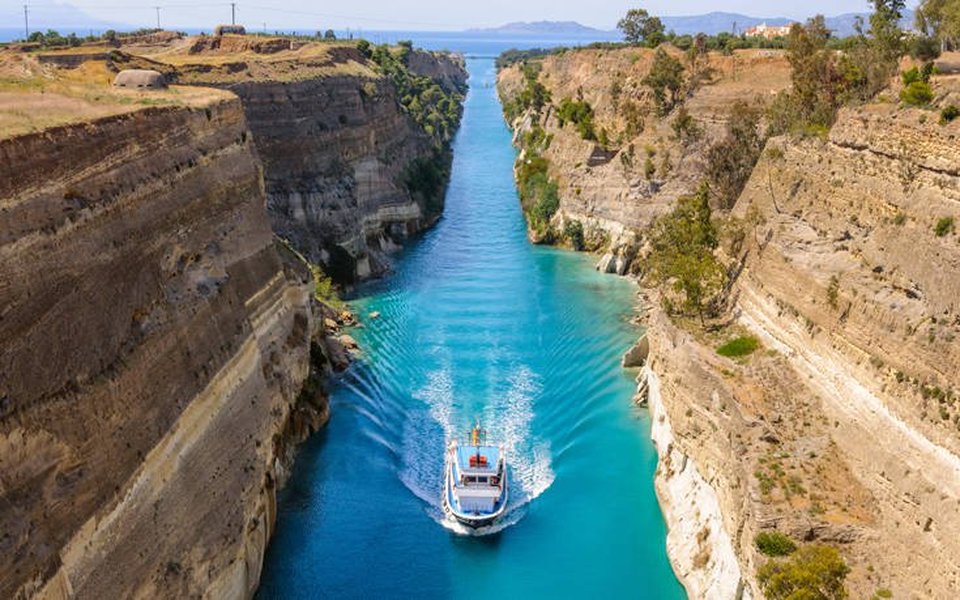 Already 5000 years ago, the Ionians settled there. Bronze weapons and tools are found there. From the year 1000 B.C., various dynasties rule ( Heliades, Sisyphides and Heraklides, Dorians under control of the king of Argos ). Corinth was partially destroyed by the Romans in 146 BC, but in 44 BC it was rebuilt as a Roman city under Julius Caesar. Roman Corinth prospered more than ever before and may have had as many as 800,000 inhabitants by the time of Paul. It was the capital of Roman Greece, equally devoted to business and pleasure, and was mostly populated by freedmen and Jews. The Apostle Paul visited Corinth in the 50s AD and later wrote two letters to the Christian community at Corinth.

The Corinth Canal is a waterway that crosses the narrow isthmus of Corinth to link the Gulf of Corinth to the Saronic Gulf. As such, the canal separates the Greek mainland from the Peloponnese, turning it into an island.

The canal, though executed in the late 19th century, has been a 2000-year-old dream. Before its construction, ships in the Aegean Sea that wanted to cross to the Adriatic or anchor in Corinth, a rich shipping city, had to circle the Peloponnese, which would prolong their journey an extra 185 nautical miles.

It is believed that Periander, the tyrant of Corinth (602 BC), was the first to conceive of the idea of digging the Corinth Canal. As the project was too complicated given the limited technical capabilities of the times, Periander constructed the diolkós, a stone road which allowed ships to be transferred on wheeled platforms.

Later on, Macedonian king Dimitrios Poliorkitis (c. 300 BC) tried to dig the canal, but his team of engineers warned him that if a connection between the seas were made, the Adriatic would flood the Aegean. This same belief also stopped dictator Julius Caesar and emperors Hadrian and Caligula. It was only in 67 AD that Emperor Nero attempted the construction of the canal with a group of 6,000 slaves. But he was murdered before the plans were finalized.

Much later, in the 1830s, Kapodistrias was the first to reconsider the idea of the canal. The job was completed, and the canal was used for the first time on October 28, 1893.

The ancient town – “Thermae” today called Loutraki, is located on the north side of the Corinthian Gulf, along a beautiful beach of 4 km. It is largely a tourist town, and is well-known for its vast natural springs, is also famous for its spring water, which is bottled and sold widely. It is always very sunny here, and tourists will find in Loutraki numerous beautiful beaches and clear water. As a resort town Loutraki is famous for its high-quality service. This is also one of the most famous destinations for medical tourism.

Price: 15 Euro (The entrance fees to the territory of the archaeological complex and the visit to the SPA center of Loutraki are paid additionally).