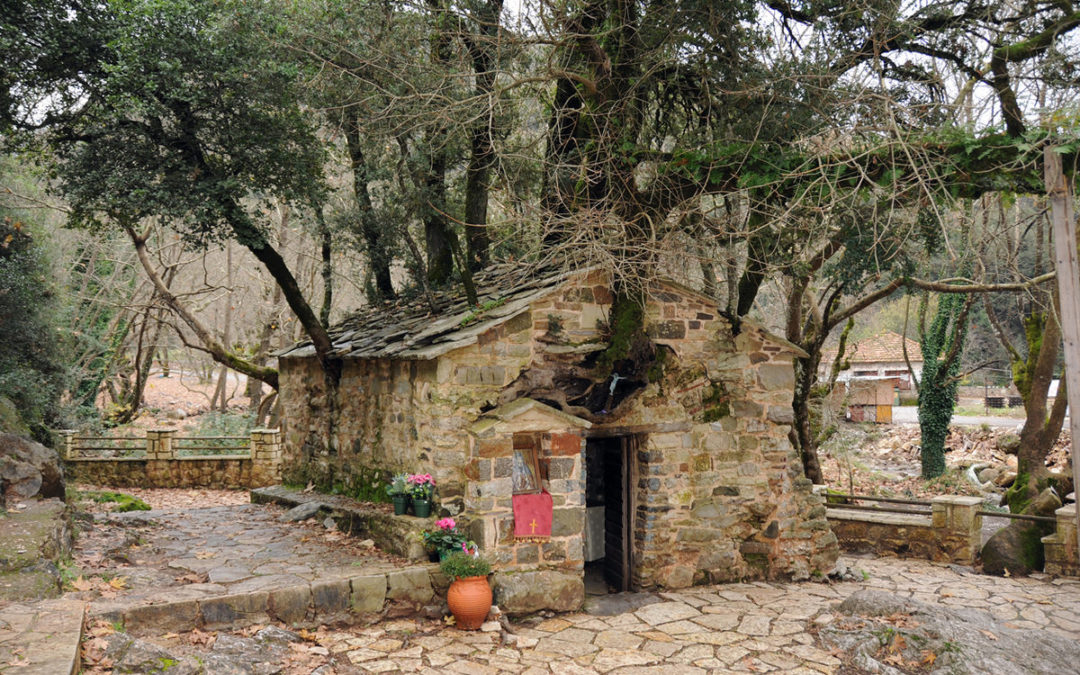 Agia Theodora Vasta is a small Byzantine church and has 17 holly and maple trees growing from its roof. Most of them are taller than 30 metres and it’s phenomenal as there is only one root about the thickness of an arm that is visible beside the entrance.

Even more amazing is its tiny barrel vaulted interior where, except for one wispy bit of green there is not one sign of the trees or roots. Another fascinating fact about the location is that a river runs beneath this church and irrigates the trees.

The Holy Virgin Martyr Theodora of Vasta grew up in a village where the family would send the sons to fight in the army against the enemy. Having no boys in the family, Theodora decided to join the army to save her father from having to do so. Disguising herself as the soldier Theodore, she soon became one of the most valiant and brave soldiers.

A woman soon developed lustful feelings for “Theodore” and claimed that he had impregnated her. Theodora was commanded to either marry the woman or be condemned to death. Doing nothing to prove her innocence (as easy as this would be) Theodora placed her hope in God.

Being condemned to death, before her execution, she prayed, “Let my body become a church, my blood a river, and my hair the trees.” On the spot where she was martyred, a spring gushed forth which flooded to become a river which still exists today.

The faithful built a small church over her spot of martyrdom where soon 17 enormous trees (some weighing over 1 tonne) began growing on the roof of the church. The 17 trees symbolised her age when she was martyred. Countless scientific studies have taken place to uncover the mystery of 1) how the small church continues to support such enormous trees and 2) how these trees grew and continue to survive with no evidence of any root system reaching the ground.

Scientists have taken x-rays of the church walls, which show no signs of any root formation anywhere. High frequency geo-radar also indicated that the roots are all hair thin and somehow thread their way inside the walls of the church to get their nourishment from the spring underneath it – quite a miracle all in itself.