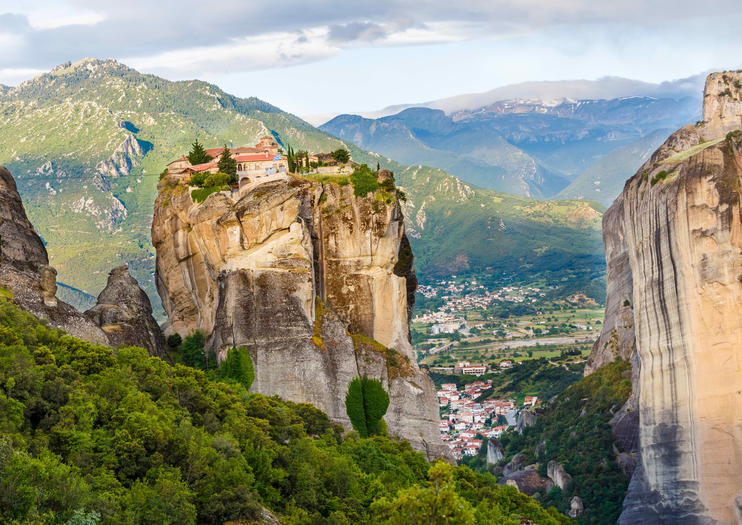 In central Greece and more specifically  in the northwestern part of Thessaly, between the North East of Hassia  and on the west of  Pindos giant rocks rise up to create a unique spectacle  that cannot be found anywhere else in the world.

That phenomenon is not mentioned in mythology or by Greeks and foreign historians. Α  thousand years ago  historians and geologists begun to investigate the creation of  these rocks forming   various theories.

The most prevalent theory is that of the German geologist Philippson . According to his theory, a large river had its estuary in the area, which for millions of years was covered by a narrow and deep sea section. The river water deposited  on the estuary debris and stones and in general various materials carried    from the northern parts of central Europe. From the accumulation of those materials, deltogeneous cones were formed.

In the tertiary period during the alpine ridges, the solid rock formations “were detached from the Pindus mountain range, which was created over the centuries and between them the valley of the river Pinios was created.

Due to the continuous erosion from the wind and the rain and because of other geological changes, the rocks have changed over the years into their current form.

On these rocks several bold hermits and anchorites found shelter who were searching for peace, serenity and Christian perfection through their prayers.

It is not known when these rocks were inhabited for the first time.   According to Byzantinologists, the first anchorites must have fled to the rocks towards the end of the first millennium.  Barnabas was the first anchorite around 950-970 AD, who founded the Hermitage of the Holy Spirit.